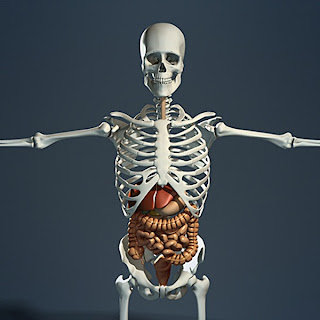 Recently, I presented a lecture at Jacksonville’s Museum of Science and History. My friend, Paul, is the new Curator of Education and he was kind enough to usher me through their wonderful exhibits.
To my utter delight, there was an excellent exhibit featuring the human body. We entered via a giant mouth and moved through a corridor lined with exhibits – an oversized cross section of the skin; videos featuring bloody surgical procedures; and my all-time favorite, preserved organs in jars! It was a nerd’s paradise.

It also got me thinking… 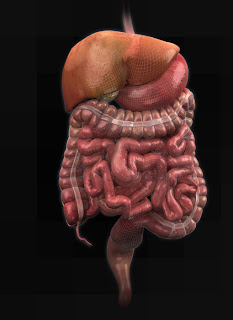 Every morsel of food we ingest follows the same pathway: in one end, out the other. So I thought it’d be fun to trace food’s journey through the body. Come with me as we take a magical mystery tour of the gastrointestinal system!
We tend to think of digestion as the processing of food once it hits the stomach. But lo and behold, it is far more complex. The stage is set before we even take a bite.


Cutting up our food initiates the process. For starters, it makes it easier to cram into our mouths, but it also makes foodstuff more manageable. Once we take a bite, the magic begins.
Three primary components tackle the initial phase: teeth, tongue, and saliva. The teeth tear, grind, and crush, thereby prepping the food for digestion and enabling us to swallow. The tongue helps usher things along, moving the food around to facilitate mastication (a fancy word for chewing). The saliva moistens the food and starts breaking down carbohydrates, so as you’re chewing, you’re actually digesting! 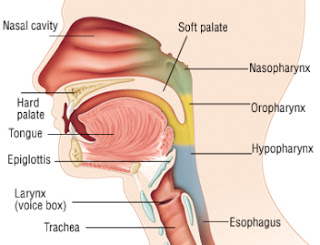 The food then begins its long journey through the body. It leaves the mouth and enters the pharynx – that area between the mouth and esophagus. But this is where things can get tricky, for we not only feed through this passage, it also assists another vital bodily function: breathing. To guard the trachea (windpipe), a little flap called the epiglottis slams shut as food passes. We’ve all experienced the hacking that accompanies fluid “going down the wrong pipe.” That’s when the epiglottis falls asleep on the job and allows a trickle into the trachea.
Because of the tenuous positioning of the trachea and esophagus, the pharynx is ground zero for choking. If a bite is too large, it can get trapped in the pharynx, blocking the trachea and making it impossible to breathe. My partner and I once pulled a ham hock the size of a tennis ball from a guy’s throat as we fought to restart his heart. Unfortunately, the ham  hock won.


Food passes from the pharynx downward by the contraction (peristalsis) of the esophagus - a muscular tube that ushers the food into the stomach. Serving as gatekeeper is the cardiac sphincter, which closes off the stomach once food has been deposited. 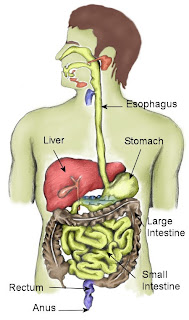 The stomach is where the heavy lifting of digestion begins. It is a flexible sac, normally, about the size of two fists, filled with digestive enzymes and hydrochloric acid. Indigestion, commonly called acid reflux, occurs when the acid escapes upward through the sphincter, causing that common burning pain in the chest. (Personally, I’ve never experienced the joys of indigestion. I was lucky enough to be born with a cast-iron gut.)


As the food leaves the stomach, it passes into the small intestine. This magical coil of innards is about twenty-two feet long and takes up most of the space in your abdomen. Gory side note: I once worked on a guy who took a shotgun blast to the belly. When I got to him, he was fully conscious and lying in the garage, clutching a mountain of glistening guts that had been expelled following impact. Ah, the beauty of eviscerations - but I digress.

The small intestine contains ridges and folds which facilitate absorption of nutrients. As the food moves through this lengthy tube, other organs get in on the action. The liver produces bile, which it dumps into the intestine to digest lipids. The gallbladder picks up any excess bile and stores it for future use. And the pancreas provides a final squirt of enzymes to complete the digestive process.


Now comes the nasty biz of poop assemblage. The food enters the large intestine where a zealous colony of bacteria eagerly breaks it down, extracting the last bit of nutrients and magically transforming it into a turd. As we all know, feces come in a range of sizes, shapes, colors, and consistencies, so when you think about it, each bowel movement contains a delightful element of surprise. 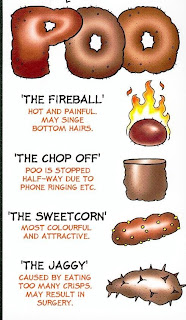 When I left EMS to pursue archaeology, I thought my days of dealing with poop were behind me. But alas, it turns out paleofeces (aka ancient poo) are veritable treasure troves for archaeologists! They hold evidence about past diet, environment, and, on rare occasions even contain the eggs of parasites. All that from a teeny tiny turd!


Prepare yourself for a squeamish sidebar: let’s talk diarrhea. Diarrhea occurs when there is too much water in the stool. Is that it, you ask?? Hardly! One of the joys of writing this blog are the fascinating information trails I stumble upon during research. It turns out, diarrhea comes in several varieties, but by far the most fascinating and image-provoking has to be “chewing gum diarrhea”! No, it’s not what you think. Chewing gum diarrhea is the result of consuming sugar substitutes, such as sorbitol, commonly found in sugarless gum, which are not readily absorbed by the body. A side effect of this sweet treat is the overproduction of water in the large intestine, leading (quite literally!) to Hershey squirts.
The final stage in the digestive process is the elimination of waste. Since you’re probably still reeling from the mental image of chewing gum diarrhea, I’ll spare you the gory details. Let’s just say that exodus occurs via the anal canal and the end result is defecation.


I hope you’ve enjoyed this titillating trip through the body. As you sit down for your next meal, think about the journey each bite is about to embark upon and pause for a moment of silent reflection at the wonder of the gastrointestinal tract. 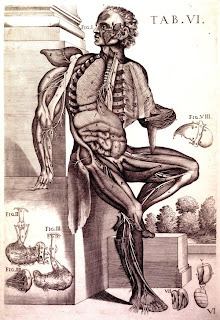 Post script: Last weekend the blog went viral. I’m sure the word “penis” in the title helped, but I wanted to thank all my dedicated readers. Your enthusiasm contributed to over 1,100 hits in the first 24 hours! Thank you, thank you and please keep sharing.
Have a great week and I'll see you next Friday.