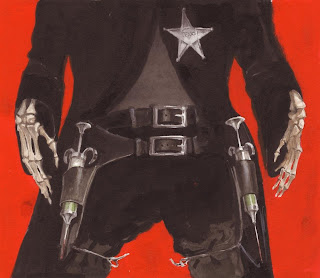 Welcome to the great state of Texas! You remember Texas – our friends out west grappling with an onslaught of leprosy from feasting on armadillos (June's Critters and Contagion)… Well, last month, Texas carried out its five hundredth execution. And that’s just since 1976, when the death penalty was reinstated after a brief hiatus. Who knows how many they’ve strung up over the last hundred years for such crimes as cow tipping and death by cactus. Texas is rough.


But Texas is not alone. There have been eighteen executions in the US just this year (although almost half of these were in the Lone Star State) and capital punishment is alive and well in thirty-six out of fifty states. We can thank our friends across the pond. 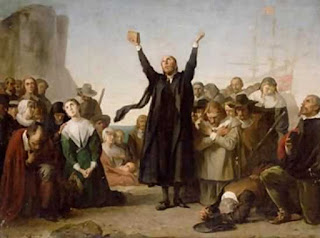 The death penalty came ashore with the pilgrims and the first documented execution was Captain George Kendall's. A member of the Jamestown Colony in Virginia, Kendall was convicted of spying for Spain and was subsequently put to death in 1608. By 1612, Virginia’s governor was so enamored of the practice that he enacted the Divine, Moral and Martial Laws, which allowed him to bump off any pilgrim caught committing the grievous crime of killing a chicken or stealing a grape. (And yet their state slogan is “Virginia is for lovers...” Curious.)


Now, here we are, four hundred years later, and although execution is typically reserved for the most heinous crimes, it is still active in the majority of states. And how do we kill our criminals? Let’s take a look. 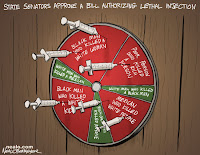 The most popular method is lethal injection. It was first adopted in Oklahoma in 1977 and the first to be tied to the gurney was a Mr. Brooks in 1982. Strapping down the criminal is just the first step. Two IVs are then started (one’s a backup; just in case) and a dose of sodium thiopental is given, which puts the person to sleep. Once resting comfortably, the prisoner is given a cocktail of pavulon and pancuronium bromide, which causes paralysis. Since inhalation is impossible without the use of the intercostal muscles, breathing is no longer an option. And to cap off the exercise, a bit of potassium chloride is administered, which stops the heart. Done.


And how many people have been “put to sleep” as they say in the veterinary biz? Over eleven hundred since 1976. 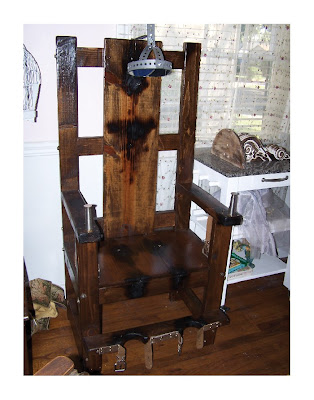 The next method (we’re going in order of popularity here) is electrocution. The electric chair was born out of a need for a more humane form of execution than the old “let ‘em swing” method. The first chair was constructed way back in 1888 and a Mr. Kemmler broke it in two years later. Typically, the person is shaved and then strapped to the chair. A large metal electrode is attached to the scalp over a saline-moistened sponge. This improves conductivity (although if the sponge is too wet, you risk short-circuiting the machine). A second electrode is attached to the leg and the person is then zapped with up to two thousand volts. After the first shock, the pulse is checked. If the heart is still beating, another shock is given. The nastiest aspects of electrocution (aside from death) are the side effects: electrocution brings out the worst in people – I’m talkin’ feces, vomit, and urine. To make matters worse, the limbs can contract with such force as to cause dislocations and fractures. It’s not a pretty scene, but I wonder how it compares to what the criminal doled out to his victim.


On to the next method. In 1924, a Mr. Jon was the first to be put to death via cyanide gas and the age of the gas chamber was born. Nevada was the first to use it, although their initial attempt was an embarrassing failure. They tried pumping the gas into Jon’s cell while he slept, but the gas escaped and Jon dreamt on. So they hastily constructed a special chamber, which has been in use ever since. Once again, the person is strapped to a chair (I see a pattern here). Beneath the chair rests a bucket of sulfuric acid. At the signal, a lever is pulled, which drops crystals of sodium cyanide into the bucket, and through the miracle of chemistry, hydrogen cyanide is created. The prisoner is instructed to breathe deeply (no lie!) so that death comes quickly, although most tend to hold their breath and fight the chair. There’s a specialized stethoscope attached to the patient through which a doctor outside the chamber can listen to the heart. When the procedure is over, the room is ventilated and the corpse sprayed down with ammonia, which neutralizes any remaining cyanide. Before the body is removed, the orderlies are instructed to “ruffle the victim’s hair” in order to release any trapped gas (they actually have a “how-to” manual). 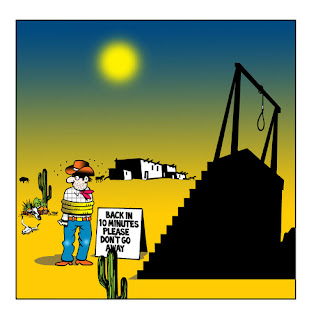 The final two methods are from a bygone era: firing squad and hanging, although they’re still on the books in several states. Delaware, New Hampshire, and Washington still kill by hanging (although lethal injection is the primary method) and you can choose the firing squad in Oklahoma (and in Utah), but only in cases where lethal injection and electrocution are deemed unconstitutional (which is ironic, since it was the Okies who first introduced lethal injection, anyway).


Perhaps we should return to that old French favorite, the guillotine. Named after Dr. Joseph Ignace Guillotin (the “e” was added later), the contraption was invented by the kind doctor out of a desire for a more humane means of capital punishment that could serve all of humanity. Prior to its invention, the poor were usually “quartered” (for you non-Frenchies, that’s a fancy term for having your limbs torn from your body). Hanging and beheading were reserved for the wealthy.


The first to benefit from Dr. Guillotin’s creativity was a Monsieur Pelletie. On April 25, 1792, his head was the first to tumble (thus, the saying, “Heads will roll”). Thousands would follow in what became festive public events that drew huge crowds. Sadly, this fine custom came to an end – but not until 1977. 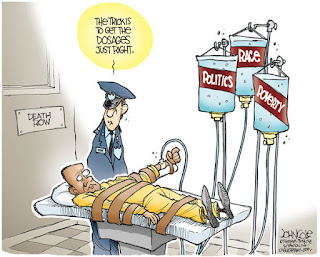 As you can see, hundreds of years’ worth of blood, sweat, and ghoulish invention have gone into devising ways to kill, and capital punishment continues to be a controversial subject in the US and abroad. If forced to choose, I’d take the easy route: death by chocolate.

Here's an interesting op-ed from The Times on the status of the death penalty in America.
Posted by Dr. Rachel Wentz at 9:24 AM