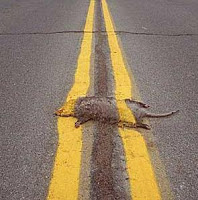 I have a confession to make: I’m obsessed with roadkill. I can’t even drive to work in the morning without gazing, mesmerized, at the previous night’s slaughter. Living on the Florida coast provides ample opportunity, for there resides a plethora of potential victims. Raccoons, possums, and armadillos make for regular roadside fodder and their mangled, bloated bodies litter our otherwise scenic highways.


I’ve made a game of it. My favorite pastime, especially on long trips, is to try to identify the critter. Heads and tails are the most useful diagnostics, since these creatures are of similar size and their appearance tends to blur once decomposition sets in.


This hobby started when I was just a child and is grounded in my fascination with internal organs. I learned early on that roadkill afforded a rare glimpse at innards and I became so enamored of splattered guts that I once chased a large toad into the road and then crouched behind a bush until the inevitable car came along and flattened him. I quickly set to work inspecting the colorful smear; that is until my sister ran inside and tattled. My parents were not amused… 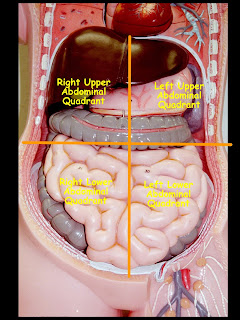 As one fascinated with guts, I chose the perfect profession. As a paramedic, I responded to a glut of horrific accidents that left behind mangled victims. Car crashes, stabbings, and shootings are just a few of the ways to lay open a body, revealing the beautiful, glistening entrails. In cases where the abdomen is intact, medics are taught to evaluate the belly by dividing it into four quadrants. For example, appendicitis pain typically flares in the right lower quadrant, although it's also common to have pain around the belly button, or periumbilical, if you want to sound sophisticated. By knowing where each structure resides, you can narrow down the suspect organ, based on where the patient points. So let's take a quick tour.

The human body is made up of various systems, such as the respiratory, digestive, and reproductive. These systems are composed of organs, which work together to perform certain functions. All humans have the same organ systems, with the exception of our sexual organs (unless of course you’re a hermaphrodite and blessed with both male and female parts).


Organs are either hollow - those you can insert a finger into, or solid, which you can slice like a nice block of tofu. They both have unique attributes when it comes to injuries. Solid organs, like the liver, can bleed profusely when torn or bruised, since they house extensive networks of vessels. Hollow organs, such as the intestines, tend to leak their contents when damaged, which can lead to massive infection. It's pretty much a lose-lose situation when it comes to damaging your guts.

The largest of our internal organs is the liver. It weighs on average about two and a half pounds, is nestled just below the diaphragm on the right side of the body, and is tasked with getting rid of toxins. The amazing thing about the liver is its ability to regenerate; if you remove a chunk, it can grow back!


But the liver is just one of many organs housed within our abdominal cavity. Its neighbors include the stomach, pancreas, and spleen, along with the intestines (large and small varieties) and those cute little kidneys in the back. In fact, those cute little kidneys are composed of about 140 miles of tubes and more than a million filters, and are able to cleanse the body’s entire blood supply about twelve times per hour!
Quite impressive.


You may be asking yourself, “What the hell is that spleen all about?” 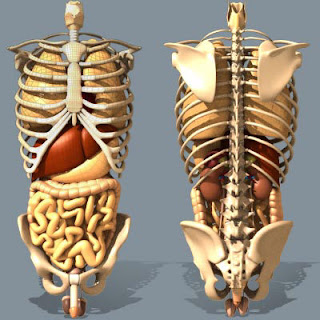 Yes, the spleen is a lesser-known organ. Kind of like that poor astronaut who jumped onto the moon right after Neil Armstrong. But the spleen is an important part of our immune system, storing white blood cells and getting rid of worn out red ones.


What you may not realize is the important role the skeleton plays in the protection and suspension of these organs. First there is our pelvis, which cradles our organs like a basin (and you thought your pelvis was only involved in walking and sitting). Our ribcage houses and protects our heart and lungs, but also those organs just beneath them (liver, spleen and pancreas). And many of our organs are suspended via the peritoneum, which keeps them from sloshing around willy-nilly in our bellies. All of this is accomplished by our awesome bony frames and is just another example of the beautiful and intricate organization of the body.


So you may abhor my lust for squished critters, and I’m not requiring  you take it up as a pastime, but the next time you’re confronted by a mangled roadside victim, take a peek - you just might enjoy it. 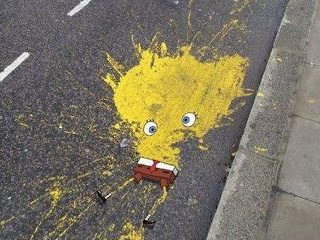