A Meditation on Decapitation 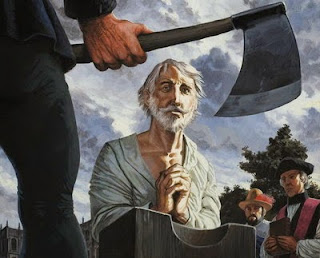 As a natural extension of last week’s piece on circumcision, I’ve found myself thinking about decapitation. During my years as a medic, I never had the opportunity to see a decapitation, although I glimpsed gory photos taken by comrades in the field: horrific wrecks in which the car and driver were transformed into convertibles; the motorcyclist who inadvertently raced his cycle beneath the hidden guide wire. There are many dangerous ways to lose your head. 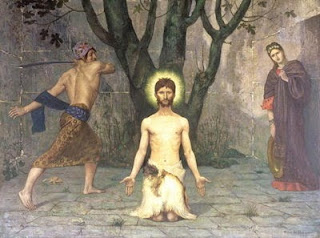 Thoughts of decapitation get the philosophical juices flowing. Does the person feel pain? Is he aware of his surroundings? I’ve often wondered what the victim experiences once the head has been separated from the body. Perhaps nothing. But for the sake of argument, let’s imagine for a moment what it feels like to be beheaded.

First, let’s tackle the pain factor. Although there are over three million pain receptors throughout the human body, there are none within the brain. Thus, the brain itself cannot feel pain, which is why surgeons are able to perform brain surgery on conscious patients. But that doesn’t mean a decapitation isn’t painful, since there are plenty of pain receptors in the neck (ask anyone who’s ever suffered whiplash). So the decapitation would certainly elicit a painful response. 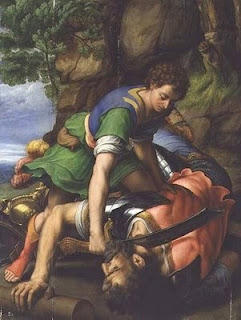 But would the person be aware of the pain? That’s where consciousness comes in.

At its most basic, consciousness is defined as the state of being aware of one’s surroundings. Let’s not digress into the philosophical theories of consciousness, for philosophy is like a wormhole: who knows where we’ll end up. Let’s stick to physiology.

There are several conditions that cause unconsciousness: low blood sugar, psychological stress, and abnormal heart rhythms. But if we’re talking about decapitation, we’re strictly concerned with blood loss, for if the head is detached from the body, blood flow is no longer an option.

Although the brain can survive for up to six minutes after the heart stops beating, consciousness is another story. Since the brain cannot store oxygen, rapid blood loss means unconsciousness occurs in seconds. That’s why you feel lightheaded if you stand up too quickly. The brain picks up on that drop in blood pressure and, as a result, you get dizzy. 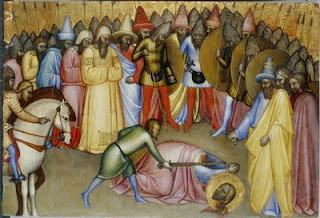 So maybe decapitation causes such an immediate loss of blood that unconsciousness is instantaneous. Then again, maybe not.

I’m hardly the first to wonder about the state of mind of the decapitated. The scientific literature is dotted with anecdotal evidence of eyewitness accounts describing facial grimacing, blinking eyes, moving lips, or a wandering gaze. Whether these are conscious movements or simply remnant neuromuscular twitching, we’ll never know. But let’s review the scant evidence, just for argument’s sake. 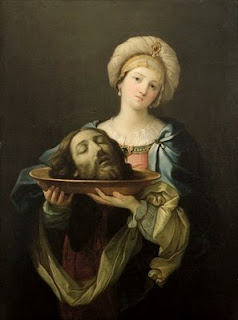 Back when the French were still enamored of the guillotine, there was a natural curiosity about the experience of the beheaded. It is said that many of those sentenced to death were asked to blink, if they were able, once the guillotine had performed its duty, and there are supposedly reports that some did just that, for up to 30 seconds.

The most famous case is that of the criminal, Languille, who was sentenced to the guillotine for murder. A Dr. Beaurieux observed Languille’s facial expressions immediately following his beheading, which the doctor then recorded in Archives d’Anthropologie Criminelle. They included the blinking of eyes and the movement of lips, which lasted for several seconds. When Languille’s face relaxed, Beaurieux yelled his name and the eyelids slowly rose. Languille focused his gaze on the good doctor before his eyes slid closed again. Beaurieux repeated the exercise and was rewarded with one final, purposeful stare before the eyes glazed over and Languille was declared dead. 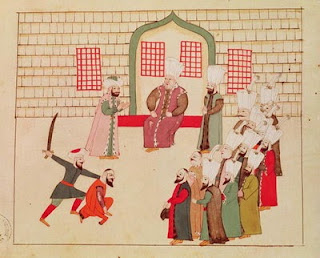 Now that beheading has gone the way of the firing squad, we may never know if the decapitated are aware. Of the few beheadings that still take place – namely the barbaric displays by terrorists – we can’t help but wonder about the victims.

Certainly they feel the pain of the blade, for the methods employed are hardly humane. But once the head is severed, are the victims still aware? Do they experience a fleeting sense of the barbarian standing over them? 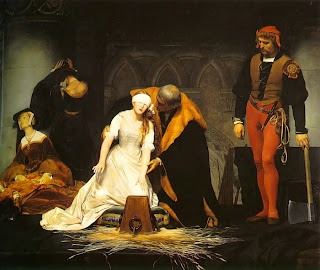 One of my favorite paintings, that hangs in London's National Gallery - The Execution of Lady Jane Grey, by Delaroche.
Posted by Dr. Rachel K. Wentz at 6:00 AM